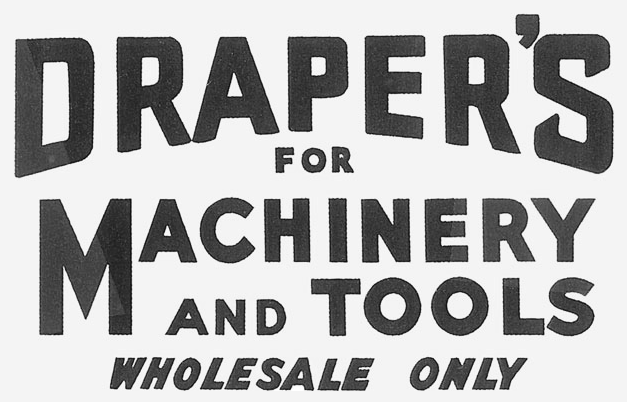 Draper Tools was started in 1919 when the founder, Bert Draper, sold government surplus and tools in markets around the Kingston Upon Thames area. This led to the purchase of the original warehouse, from which the Draper Tool Company Limited as we know it today was born, although at this time it was known as B. Draper & Son Limited and owned the trademark B.D.S. Although Draper Tools sold its own brand as early as this time, it was also a quality Engineers Merchant and Tool Wholesaler, selling brands that are well known today, such as, Britool, King Dick, Elliott Lucas, etc.

When Bert Draper passed away in 1963, control of the Company passed to his son Norman. With the increased business and cramped conditions at Kingston Upon Thames, Norman purchased the freehold rights to the current premises in Chandler's Ford, Hampshire at auction the same year. Norman pushed the business forward dramatically and developed the 'Draper' brand as we know it today, by importing quality tools from all around the World. He also established 'exclusive' relationships on a family to family basis, with such Companies as Elora and Knipex, which still exist today.

Norman died in 1994 and the Company is now run by his son, John. His wife Joan, who passed away in 1999, produced, almost single-handedly, the Company's first type-written catalogue in 1953. This level of family involvement would be rare in any other company of this size in the UK... But then Draper Tools is no 'other company!'

John took over the reins in 1992 with the task of taking the company into the new century. Draper Tools continues to thrive on a mixture of inward investment, active support for the independent stockist, striving for operational efficiency and all underpinned by the golden rule since 1919 - Guaranteed Quality. The current premises in Chandler's Ford have been added to considerably since its purchase and has now reached a size of 535,000 sq.ft. It is now probably the largest stock of tools in one place in the UK.